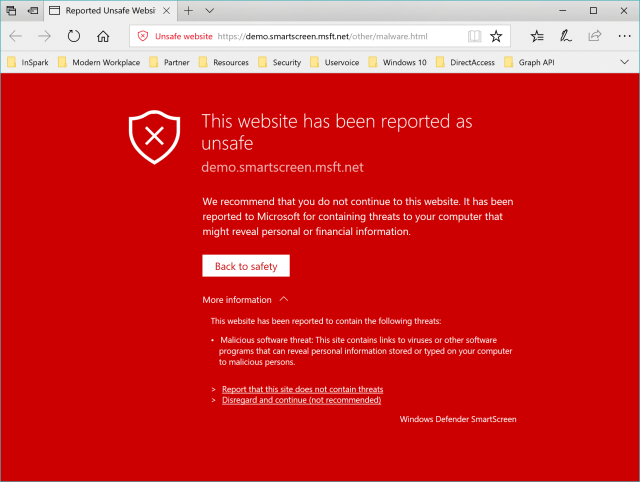 Windows Defender Exploit Guard (Windows Defender EG) is a new set of host intrusion prevention capabilities for Windows 10, allowing you to manage and reduce the attack surface of apps used by your employees.

There are four features in Windows Defender Exploit Guard:

The score of Windows Defender Exploit Guard is measured against the below improvement areas including cloud-based protection. 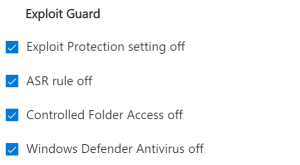 The feature is comprised of a number of rules, each of which target specific behaviors that are typically used by malware and malicious apps to infect machines, such as:

The following sections describe what each rule does. Each rule is identified by a rule GUID, as in the following table:

The Exploit Guard Attack Surface Rules are configured by using the Defender node of the Policy CSP.

Controlled Folder Access helps you protect valuable data from malicious apps and threats, such as ransomware.

Network Protection helps reduce the attack surface of your devices from Internet-based events. It prevents employees from using any application to access dangerous domains that may host phishing scams, exploits, and other malicious content on the Internet.

It expands the scope of Windows Defender SmartScreen to block all outbound HTTP(s) traffic that attempts to connect to low-reputation sources (based on the domain or hostname).

Remark! In order to reflect your improvement of your security score from in Windows Defender ATP Security Analytics dashboard take into account the following:

Note: The setting Block Office applications from injecting into other processes with GUID 75668C1F-73B5-4CF0-BB93-3ECF5CB7CC84 is excluded from the baseline. Consider enabling this rule in Audit or Block mode for better protection.

Windows Defender SmartScreen helps to protect your employees if they try to visit sites previously reported as phishing or malware websites, or if an employee tries to download potentially malicious files.

SmartScreen determines whether a site is potentially malicious by:

SmartScreen determines whether a downloaded app or app installer is potentially malicious by:

You can take the following actions to increase the overall security score of your organization:

SmartScreen can be configured using the Microsoft Intune UI or by configuring a custom profile (OMA-URI).  The SmartScreen UI section is split in a browser part and a system part.

Now we configured and enabled Exploit Guard in block mode we do see a significant improvement over time for this improvement area.

In my previous blog we’d reported a score of 35,8 for Exploit Guard, after applying the security baseline configuration we’ve a new score of 66,7 which is almost doubling the score.