What is System Center Advisor?

System Center Advisor is an online service that analyzes installations of Microsoft SQL Server 2008 (and later versions) and Windows Server 2008 (and later versions). The System Requirements can be reviewed here. Advisor collects data from your installations, analyzes it, and generates alerts that identify potential issues (such as missing security patches) or deviations from identified best practices with regard to configuration and usage. Advisor also provides both current and historical views of the configuration of servers in your environment.

Advisor is developed by the Microsoft System Center Advisor product group in partnership with Microsoft Support engineers to ensure that the issues customers report to Microsoft are detected before they affect your environment. Advisor is regularly updated to reflect the most recent experiences of these engineers, who support customers around the world.

What does Advisor analyze?

With System Center Advisor, the following workloads are analyzed:

The System Center Advisor agent collects data about your environment from the following locations:

What data is collected?

The full list of data points collected by the agent is available for download here, from the Microsoft Download Center, in an Excel spreadsheet. For example, included in this list are properties about SQL Server like data from SERVERPROPERTY, sys.databases, and sys.configurations. In addition to this list of data points, we collect some diagnostic data from event logs to help identify any problems with the Advisor on-premise software.

How the data is stored and sent to Advisor?

The agent stores the collected information in a set of XML files on the local disk. You can open and audit these files. See View the Data that is sent to System Center Advisor for more information. Every 24 hours, the xml files are packaged into a compressed CAB file and copied to the gateway. The gateway then securely uploads the CAB file to your Advisor account.

The Advisor environment is made up of the Advisor web service, hosted in the cloud, and the on-premise software, installed in your local environment. The on-premise software consists of one gateway and at least one agent. The agent collects data from your server and analyzes it using a set of rules (similar to a management pack in System Center Operations Manager) known collectively as Advisor knowledge. The analyzed data is regularly sent from the agent to the gateway for upload to the Advisor web service. If the data indicates an issue or a deviation from best practices, an alert is generated. By connecting a web browser to the Advisor portal, you can view the alerts and the associated remediation guidance.

Before you begin deploying the on-premise software, ensure that you understand the following:

As mentioned earlier the Advisor environment is made up of the Advisor web service, hosted in the cloud, and the on-premise software, installed in your local environment. The on-premise software consists of one gateway and at least one agent. The installation of both gateway and agents uses the same setup source files and can be installed from the setup wizard or by command line and therefore suitable to deploy your System Center Advisor infrastructure by Enterprise Deployment Tooling like System Center Configuration Manager (SCCM).

As part of System Center Advisor deployment consists at least one or more gateways which may vary due to facts like; scaling, number of agents, geographic locations and high available.

For example, to install a gateway that uses myproxy.demo.int proxy server and proxy port 80 and restrict agent access, run the following command: 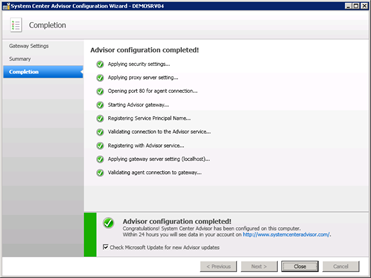 Deployment of the agents

To install an agent that communicates with demosrv04.demo.int gateway, run the following command: 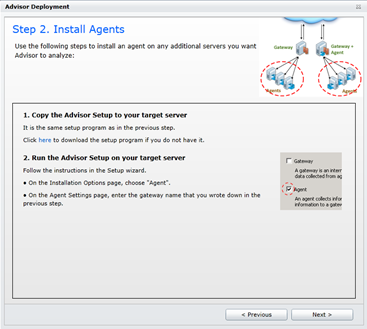 During System Center Advisor gateway installation, if you selected the option to restrict connections to your gateway, you have to manually add (authorize) your agents’ computer accounts to the Allowed Advisor Agents local group on the computer where the gateway is installed.

Configure the Gateway and Agent

You have two ways to change the configuration of your System Center Advisor gateways and agents:

During testings’ I was wondering if the Advisor agents support a failover Gateway similar to Operations Manager agents support a Primary and Failover Management Server. From a Gateway perspective both Gateway Servers have a different CertificateThumbprint belonging to the same “management identity”. From a client perspective each client has a unique GatewayID which is generated during the gateway configuration process.

By simple adding an additional gateway the GUI won’t accept and by registry it doesn’t makes any sense L As far I couldn’t find any background information if this is a supported scenario. I send the Advisor Product Group some feedback and drop a line when an update comes around. 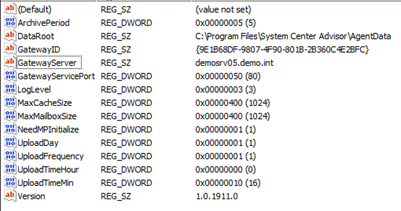 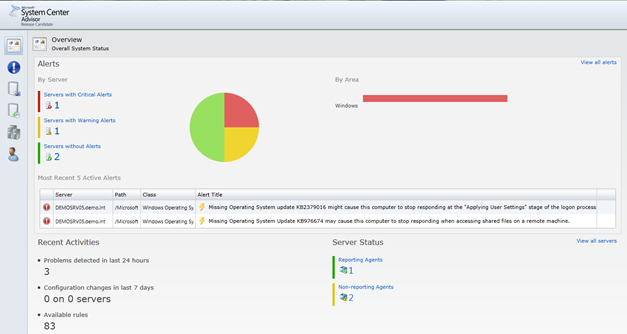 Calling System Center Advisor a SCOM cloud based solution is still too much, just the fact System Center Advisor is not a real time monitoring tool. Call it a light version ;-) Call whatever you call it, where the deal is essentially the vision how Microsoft continually coordinates and allign there management products, and products in general. We see this with Windows Intune as well compared to System Center Configuration Manager functionality. But I believe it is just a matter of time Microsoft cloud based services like Advisor/SCOM, Intune/SCCM, Concero/VMM are getting closer to the on-premise functionality as we’re used too.

I guess I´ve to change my signature…. System Center-Cloud Consultant :-)

For more information on System Center Advisor visit http://technet.microsoft.com/en-us/library/ff962520.aspx or to sign up for FREE access to the Release Candidate, visit http://www.systemcenteradvisor.com