Just drop you a quick line that Microsoft System Center Advisor Public Preview is available. You can sign up to the public preview by https://preview.systemcenteradvisor.com/ 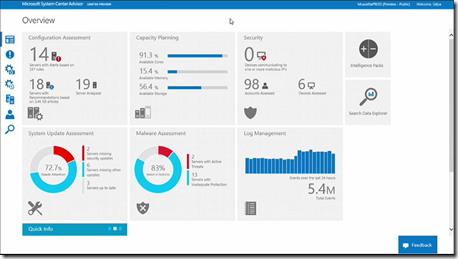 What strikes me is the lack of support for the last generation R2 product releases such as Windows Server 2012 R2 and System Center 2012 R2 is (not yet) supported. This applies only to a direct management scenario.

There is a special Twitter handle to follow and drop your findings regarding the System Center Advisor Limited Public Preview.

What is System Center Advisor?

System Center Advisor (http://www.systemcenteradvisor.com) is an online service that analyzes installations of Microsoft server software. Advisor collects data from your installations, analyzes it, and generates alerts that identify potential issues (such as missing security patches) or deviations from identified best practices with regard to configuration and usage. Advisor also provides both current and historical views of the configuration of servers in your environment.